In preparation for the Golden Mahseer season in Northern India; fly tying and new techniques, by Andy Trewin 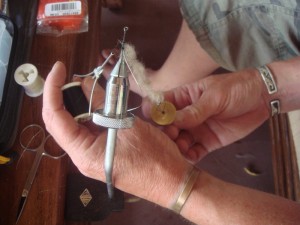 With temperatures beginning to rise in the Western Himalayas of India, I have started devising some strategies on how best to catch that elusive monster, Golden Mahseer. The water level in the lake is dropping fast, which means the water temperature will also be rising. This is so important for a good fishing season, as last year the water levels stayed very high due to a heavy monsoon and good winter rains in the rest of India. This made for a difficult season with the Golden Mahseer, with the catch being well down on previous years. Respectable amounts of fish were landed but it did make us realise just how important the shallower, warm water was to the number of fish taken.

The upside of the higher water levels last year was that our Sol (Snakehead) catch rocketed and we spent a lot of time perfecting new ways of catching what is quickly becoming my favourite Indian sport fish. The most successful new technique was using a canoe, one person quietly paddling up the gullies with the other casting from the front, parallel to the banks. This has to be done with pin point accuracy, as the Sol are easily spooked and any noise or strange movement quickly drives them into deeper water. The bigger fish tended to be in the shallow water at the top of the gullies and once we mastered the technique we were landing up to six decent size fish in a two hour session. The signs for this year all look very good with the water levels already lower than they were in May last year. This is fantastic news, as it means fly fishing will be so much more successful, with the Mahseer herding the fry into the shallower water, which will give the perfect opportunity to fish sub surface fry patterns.

For the last few weeks I have been tying flies in preparation for the new season; fry patterns are the most successful and I have tried many variations. The best of these is still the”Mahsunti” which I first tied on the veranda at Basunti two seasons ago. Hopefully this coming season will be the first that we can also catch Sol on fly. Bouncing the fly of the banks before letting it drop back into the water is going to be tricky, but definitely possible. This was the method we used a lot with a lure and the results were very rewarding.

Every year we try different techniques. Last year we gave braid a good try, but the short, sharp casting techniques we used made it tangle constantly. We are now back to using mono with a few new stronger, more supple types to try. We also had a lot of trouble with fly line connectors so this year we are only using lines with welded loops and lots of quality backing. I will be taking a lot of new Rapalas to test but so far we still have not found anything that the Mahseer like better than silver number 2/3 Mepps. 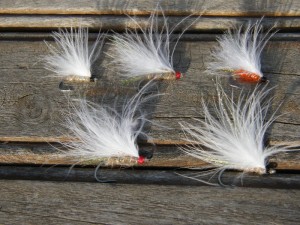 Having written this, I feel that April just can’t come fast enough. Angling in India has so much potential and each visit makes me realise just how lucky I am to be fishing in this most beautiful, unspoilt area of the world.