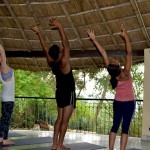 Although I know my downward dog from my one-legged king pigeon pose, I’m relatively new to yoga.

Yet even almost breaking my nose while attempting a handstand wasn’t enough to take away the enjoyment of attending a 10-day yoga retreat in the Himalayan foothills. 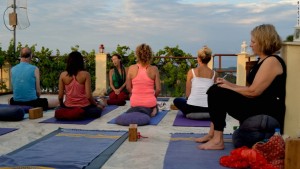 The Basunti retreat in Himachal Pradesh, north India, is set in a wildlife reserve in the Kangra Valley and offers immersion into one of the most spiritual regions of India.

It’s home to a leopard, mongoose, snakes, scorpions, butterflies, birds and sole fish, to name a few resident creatures.
India’s Kangra Valley
David Butterworth, co-owner of the retreat with his wife Izzy, is the resident storyteller.In one of his many animal-themed Basunti anecdotes, Butterworth explains how he once saw a sole fish jump out of a pond and snatch a spotted dove in flight.

Though yoga retreats are on offer year-round, one of the best times to go to Basunti is October, when Bridget Woods Kramer is visiting. (This year, she’ll be at Basunti October 3-12.)

Kramer is one of the world’s most acclaimed instructors of Anusara yoga — a practice that focuses on the heart and individual ability of each student. 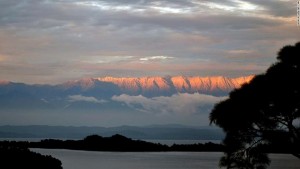 The Basunti day starts at 7 a.m. with a two-hour yoga session in the thatched shala facing the peaceful waters of the Kangra Valley.
The Kangra Valley has more than 420 species of birds.
At the entrance stands a striking brass statue of the Hindu god Shiva, a symbol of strength.

Practice begins gradually, with a talk by Kramer about Hindu gods and goddesses that resonate with yogic teachings and the benefits of yoga.

A herd of cows quietly makes its way past, giving us curious glances as we twist and turn and try to maintain our balance.

Kramer says the need to stand tall and strong in yoga translates into everyday life: “It’s a reminder to stand tall in the face of fear.”

She caters to all levels, encouraging partner work or individual practice.

Students on my retreat range from complete beginners to new or accomplished yoga teachers.

Although I come crashing down on the marble floor while attempting a handstand, by the next attempt, and with a lot of encouragement from Kramer, I feel I could maintain the position for ages.

Well, at least two seconds and with the support of three people.

What I come to realize is that these seemingly acrobatic poses require self belief and confidence; the harder the pose, the more I have to silence my fears and gather resilience from within — which makes me feel stronger on the whole.

“I could tell you could do it,” Kramer says, reassuringly. “I knew you were just feeling scared.”

Before the day’s second two-hour yoga session in the evening, we climb to the top of Basunti’s main building roof, accompanied by religious chanting and traditional drumming from the local temple during evening prayers.

The roof is encircled by plants and trees, all enclosed by Himalayan peaks, which gradually fade as the sun sets and night falls.

Evening practice focuses on breathing techniques — something that sounds simple enough but that we take for granted in everyday life. Using exercises to ease and open up areas of the chest and back change the way we feel, our posture and allows energy to flow freely through our bodies.

After a physically challenging but awakening session, a bell signals dinnertime, accompanied by the chanting of crickets, while guests mingle on the verandah. Basunti provides freshly prepared meals using local produce and has its own well. Visitors can try Basunti’s homegrown lemons, aloe vera plants and traditional Indian neem plant, known for its effective healing properties. Orange, mango and papaya trees are also on the grounds.

………….continue reading the full article (with images) by clicking here

Bridget Woods Kramer will be teaching and leading her yearly Anusara yoga retreat at Basunti during 3-12 October, 2015. For information, please email us via the Contact page or email Bridget directly.