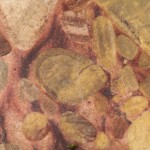 Tessa McWatt on her stay at Basunti; a writer’s retreat.

“The words of my book nothing, the drift of it everything.” Walt Whitman

I had a novel to write. It was neither burning to be written nor demanded by a publisher. But I needed to write, knew that writing a first draft was the toughest graft of all, so I decided on a retreat and came to northern India.

Basunti: they tell me it is the name of the flower that grows down in the meadow, but I haven’t seen it yet, as its pink and white blossoms appear after monsoon season, and now it is March, dry, and the water in the Pong Dam is low, the earth exposed to resemble quarry rock with sandy ridges. Conglomerate stones of ochre, white and pink are the only petals, as though blossomed from the flooded river bed. These stones I have stood over for hours, to marvel at them, puzzling out the origins of their patterns and their unlikely existence on a man-made lake. In August, September and October, after monsoon rains, when the dam fills up and the melting of the Himalayan snow is at his peak, the stones will be covered up and the lake will brim to the tree line. The deep sandy gullies that now provide excellent walking for me and grazing in the meadow for the cattle, will be water, and this retreat, I imagine, will seem like its eponymous flowers floating atop the reservoir.

A flower that floats, a meadow that becomes a lake, stones like freshwater jewels: after three weeks of life here, I realize that the simplest way of describing what happens at this retreat is alchemy. A flower, after all, is a symbol of birth, growth, beauty, fecundity, symmetry, health. A flower could be said to be a state of mind. And this, indeed, is Basunti. 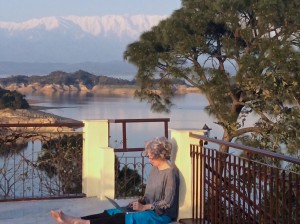 Traditionally a yoga retreat, Basunti was not the obvious option for two writers, but the wonderful family who run it found a way to accommodate the two of us, who just wanted to sit and do what essentially looked like nothing, all day long. But in between the verses and the paragraphs and the nothingness of our days there has indeed been alchemy, and it is very difficult to think of leaving today.

I had barely formed the idea for the novel when I got here and started the first days of that hard graft I had been expecting. After a beautiful breakfast (fruit, freshly baked bread, omelets) I would take time alone by the pool with books, thoughts, tea, more thoughts, then the bell would ring for lunch and I’d join the group for delicious soup and salad, more thoughts and some scribbling, followed by a long walk along the footpaths in the jungle and down towards the far side of the peninsula that faces the dam. A later bell would signal a fabulous dinner under the stars which would lead finally to a peaceful sleep. During all that ‘doing nothing’ work has flowed, ideas, images, characters, settings have floated up effortlessly with the space to think and dream as I look out to my right, over the meadow and lake, or to the left and the Himalayas lined with snow like cake icing. Everywhere you look at Basunti there is movement, colour, and a designed delicacy and respect for both nature and people. Our hosts, the Butterworths, have welcomed us into a way of living and thinking that is slow, creative, observant, respectful, and joyous. A writer could want nothing more. 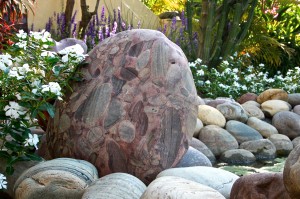 The longer one stays at Basunti — the more one does ‘nothing’ in the flow of everyday life — the more one wonders how it is all possible. Like a fine piece of art or writing, the real work is in making it seem effortless. I couldn’t stop looking at those stones at the lakeside. I’ve never stood anywhere so long and looked down at the ground with such awe. I wanted to know how it was possible, how rock had formed within rock, how those colours and swirls had been created; I wanted to know how the owners of Basunti moved all those loaf-sized and wheel-sized conglomerates up the hill, over the meadow and to the top of the cliff where they form the cradle for the stunning garden there. When I asked, the answer was simple: “We carried them, one at a time, over a long period,” but I still find this hard to believe, given the weight, the distance, the heat, but then again, this deception of effortlessness is what I was also experiencing in my writing, one word at a time, over a long period. Something bigger was taking shape despite the nothingness.

On a jeep journey from Basunti up into the Himalayas, I saw the same stunning stones in the walls of the cliffs that had been carved out of the mountains to build the road, and I remembered that at one point the Himalayas had been under the sea and that the stones I had been seeing down by the lake had once been the sea bed. The mysteries of how things got to where they were, including how I had arrived here in India and was experiencing the easy flow of chapters upon chapters now seemed irrelevant, and I was just going with it. 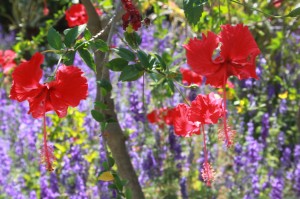 After several exciting days in McLeod Ganj — with visits to temples, including the Dalai Lama’s, with the mountains close up, with shopping, traffic, and town life — I have come back to Basunti with a feeling of relief akin to coming home. Spring has deepened: the colours more vibrant, the air thicker with pleasure – the lemon blossom outside my door causes me nearly to trip with that pleasure every time I walk up the stairs. Bananas that hadn’t yet ripened are ready for eating, the fish in the ponds are mating and leaping, the birds – oh the birds! – are increasing by number and species, and I have written a good chunk of a new book. As the Bulbul that previously came only for breakfast scraps has now joined us for lunch and afternoon tea, as the vegetable garden flourishes and brings us our own potatoes, lettuce, carrots, as the butterflies arrive, as the Amaryllis blossoms, as the temperature rises, I find I am deepening the structure of my novel, honing a new voice. And, yes, still sitting up at my desk or down by the pool, looking like I’m not doing much of anything, the grafting coming not from me but towards me. 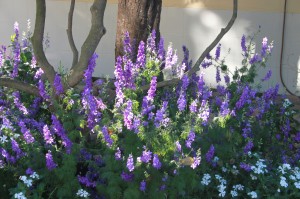 As I writer I know that hard work often takes place when you barely know it’s happening. And now after being a little longer in India I realize what a miracle Basunti is: in a relatively isolated part of the country — where materials are hard to procure, where buildings tumble, where electricity is erratic – the hard work to create this retreat is something that could only have happened because it’s connected to how we all should live. Flow happens in only a few key undertakings: meditation, art, communion with nature. That alchemy.

So, as I prepare myself to leave here today, what I take with me is not only several thousand words of new writing, but a deeper connection to the work beneath easy connections, the beauty beneath challenges, and a determination to keep doing a lot of nothing.