Gardening at Basunti – by Jono 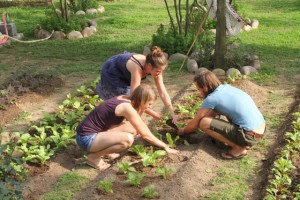 After a hard day’s work amongst beds in the vegetable garden, surely the most satisfying end is to dine on the fruits of your labour; and nothing whips up an appetite like many hours spent on a veranda that overlooks deliciously inviting rows of lettuce, spinach, beetroot, rocket, potato, carrot, fennel, chilli, and ginger.  At first, however, we just wanted to pull something out of the ground.

So it was with grins as wide as a pomelo that Bella & I, and Alex & Rosie (the “hired help”) donned thick gloves and took to a potato bed.

“There’s a prize for the biggest potato!” said Dave.  Although what that prize could be, other than maybe a potato, we didn’t know.

It was mere minutes before Alex was guarding a rather substantial pile under him, protecting his spuds as a hen would her nest.  We were jealous of his results, and suspected it was his technique, rather than his soil, that was yielding such results.  So we revised our strategy and delved deeper into the sod, fingers feeling for tubers.  I had the misfortune of finding the first dud spud; its jacket imploded easily as its gooey middle oozed.  I suspected contamination by one of the hundreds of bugs and beetles that were distant, and mostly more dangerous, cousins to those from the more familiar English garden.  Once the first was consigned to oblivion over the cactus fence others were found and did follow, but the overall quality of these home-grown delights was overwhelmingly good.  The hoard steadily grew until seemingly hundreds surrounded the exhausted earth.

That our grins were not receding revealed how the novelty of the experience was not lost.  And we will lament the next time we have no choice but to buy pre-packaged potatoes at our local supermarket. As the residual soil on skins enjoyed drying under the sun, unaware how it would soon be brushed aside, we were honouring our prior engagement with a bed of ginger.  It wasn’t long before we spied the many protrusions, breaking the soil, that suggested a subterranean landscape rife with rhizomes.  We gingerly dug a dry moat around every plant, undermined each entirely then lifted up and out, ensuring none were damaged in their liberation from the ground.

The yield duly washed, and once laid out to dry the amount we had accumulated was again impressive.  Our harvest dreamt of flavouring soups and gingerbread men, of joining honey and lemon in hot water, of snaps and wine and biscuits and ale and beer, of being pickled and candied and crystallized, of soothing throats and settling stomachs.

We dreamt of waking one morning to discover the Apocalypse had passed us by.  All we needed to survive we had before us, a mere pick away.  We dreamt of pruning our way to self-reliance as the Four Horsemen rode beyond the horizon.

As Dave redirected our distant gaze to the bed of spinach that needed thinning, we realised just how much knowledge and work was needed to keep a garden in such fine fettle.  So it was that our thoughts wandered through our imaginations towards our own small patch of land to look at and tend to.  It’s a land in which roots, vines, and herbaceous borders are tilled by skill in sowing and patience in planting.

Dave’s pride in the Basunti produce is clear to see and it’s clear to see why.  I leave inspired.  Without a garden in our London flat we are limited; but if in one week’s time its window sills are not lined with soil-filled pots harbouring expectant seeds then our taste buds will never forgive us.