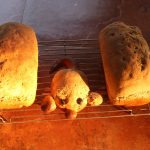 ﻿I was researching a recipe for Banana Bread when I came across some line drawings of the bread mice I used to make when I was working in Neal’s Yard Bakery. Every baker had a signature, whether it was the way they sliced the bread or stacked it or the specials they made, mine was bread mice.

As it was baking day I decided to make one. First I made a regular wholewheat dough, let it rise once then kneaded it again. I cut a small piece for the nose, two slightly larger pieces for the ears, an even larger piece for the tail and the biggest chunk for the body. Roll the body into a stubby cone, the tail as a long thin cone, two balls for the ears which you then flatten and a small ball for the nose. Join them firmly to the main body using some water to help them stick. use a chopstick to push the ears and eyes (raisins or sultanas) into place.

Place the mouse on a lightly oiled baking tray,and let it rise again. I use the top of the oven, as you have to pre-heat the oven in preparation for baking the bread. Once it has about doubled in size place in the oven and cook at 170 degrees Celsius for 45 minutes.

The mouse came out of the oven with slightly droopy ears so next time I will push them in more firmly with the chopstick. These make great Christmas decorations and you can also add Walnuts, honey and Cinnamon to the body which makes them even more delicious.

The sun was just setting when my baking was finished so I watched it go down on the deck, munching on a warm mouse with a nice glass of chilled wine. 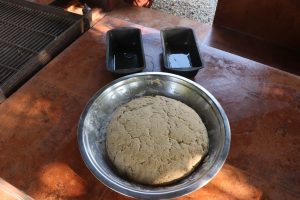 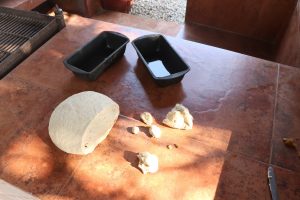 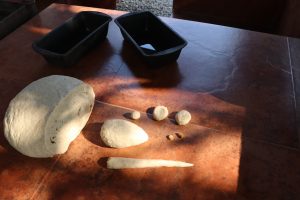 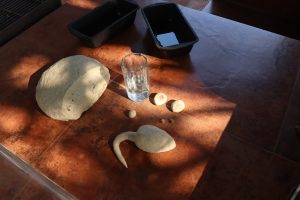 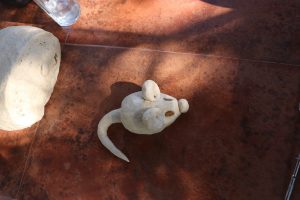 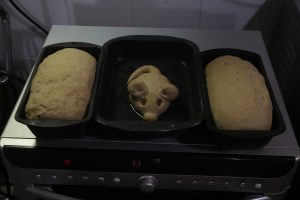 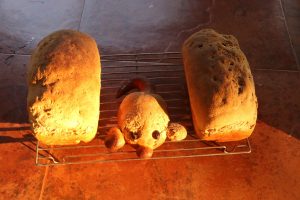