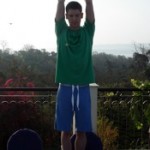 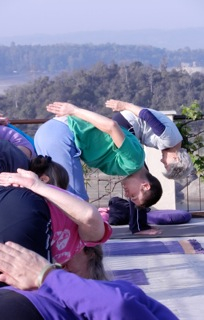 Basunti: a flower growing in northern India in the foothills of the Himalayas, and the name of the retreat centre chosen by Sheila for a two-week yoga course in March/April 2012. Built about five years ago by David Butterworth, the centre is described as of ‘modern Indian design with European plumbing’. It is simple, comfortable and tastefully decorated, and nestled in a stunning garden of flowers, trees and vegetables. The building is on a hill and gives the illusion of being surrounded by water. The lake views are created by the Pong Dam Reservoir, a 26-mile long source of irrigation and hydroelectric power constructed in 1976. You can see the mile-long dam from Basunti, a somewhat disturbing reminder of the villages, temples, palaces and history submerged by India’s need for power and water. The area has an ancient history: invaded by Greeks, Persians, Moguls and other empires, all attracted by the fertile valley on the spice route. Now it is a wildlife reserve and haven for birds, with wonderful names like Himalayan bulbuls, rufous treepies, barbets, green bee-eaters, mynas and woodpeckers.

A favourite were the groups of jungle babblers who noisily responded to some of our chanting, especially Hram Hrim. 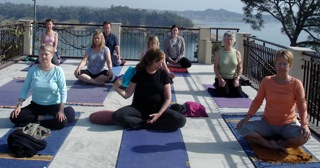 The edge of the Himalayan range is about 38 miles away. A dust cloud over northern India obscured our view during the first week. Sheila likened the cloud to the idea of avidiya, the confusion that obscures our understanding of reality. The magnificent snow-capped peaks were there all the time and, when they appeared, they looked strong, ethereal and magical, towering over the closer views of rolling hills.

Morning asana practice on the roof of the main building started at 7.15 am as a hazy sun was strengthening, after a cup of lemongrass or black tea served on the veranda. 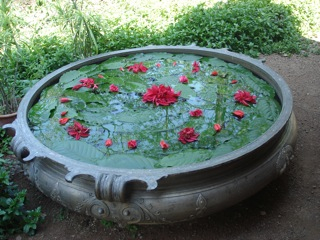 Some mornings the practice started with honouring the four points of the compass, starting with the East. The teaching focused us throughout on our axes, our inner bodyline around which we turn and which keeps us grounded. This reflects the Earth’s axis, around which our planet turns. The theme of the yoga course was the eight limbs, or astanga yoga, as explained in the second chapter of Patanjali’s Yoga Sutras, especially the yamas and niyamas in YS 2:29 to 2:45. The theme juxtaposed with the octagonal yoga shala, a beautiful thatched outside space we used for afternoon practice, sutra study and chanting when we needed shelter from the sun. As evening drew in, we could smell the aroma of the warming marijuana, growing wild around us.

The time and space between practices gave us the opportunity to retreat fully from normal life. There were walks in every direction, usually with the water’s edge as the target. Braver souls 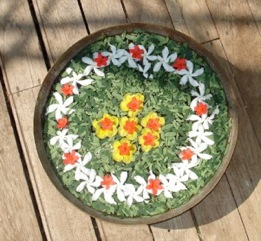 swam in the lake, others walked further afield, our intrepid wildlife explorer finding a leopard footprint on one of her solo trips. She identified and recorded sightings of 76 birds over the two- week retreat, and her enthusiasm was picked up by the whole group. A walk to the nearby hamlet, occupied by families who had been squatters after the flooding, showed how some had benefited from the work offered by Basunti. They were happy and friendly and were clearly accustomed to seeing strange Westerners practising, saying ‘Namaste’, the local lads inviting us to join in a village game of cricket and the children giving us flowers. A bigger village further afield and down the mud track we had alarmingly driven along on arrival, offered a few places to buy drinks and bangles and to see the local primary school. Sitting looking at the lake gave us a view of the fishermen meditatively laying and pulling in their nets, or the water birds swooping over the lake. Otherwise, we drew and painted, swam in Basunti’s pool, chatted, read, devised acrostics to help us learn the Sanskrit words representing the yamas and niyamas, and enjoyed deep therapy from a skilled Tibetan masseuse.

Delicious food, much of it freshly picked from the garden, nourished us. Breakfast offered us porridge with jungle honey or gur, raw cane sugar syrup, followed by omelettes and home-baked bread. Lunch was soup and salad, and the evening meal usually a couple of spicy vegetable dishes, often followed incongruously by banana custard. We ate our meals on the veranda, apart from one where we sat at a big table under a sparkly starry sky eating barbecued fish caught in the lake.

We had a couple of longer trips out. Some of us visited Masroor, seventh-century temples sculpted out of rock and damaged by an earthquake at the beginning of the twentieth century but still holding a strong spirituality. Another group went to Bathu to see eighth-century temples submerged by the lake and only visible a few months each year when the waters recede before the monsoons. Both places were special for being undiscovered by tourists. 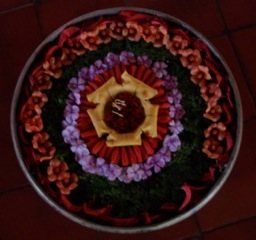 A busier trip took us overnight to McCloud Ganj, the home of the Dalai Lama and Tibetan Buddhists in exile. For a few hours, we were thrown out of the Basunti ‘bubble’ into the bustle of shopping bazaars and backpackers’ cafés. A special moment was the sight of the Dalai Lama leaving in his cavalcade for a teaching trip and waving delightedly to the crowd as if he was surprised that people had bothered to turn up to see him. We had an excellent guide to take us around the temple and on a walk up the hill to the monastery and shrines. We also went to Norbulingka, a centre dedicated to the preservation of traditional Tibetan arts and crafts, and the Tibetan Children’s Village. The village is home and school for 1,600 children, many of them sent over the Himalayas with traders by their parents in the hope and expectation they will thrive in India.

The trip agitated the vrttis in the citta, leaving us three days back ‘home’ at Basunti to recover our axes before the end of the retreat. Sheila’s skilful teaching did just that, as it had when other disturbances had distracted us during the retreat. For me, the whole experience was restorative and transformative, leaving me inspired to deepen my personal yoga practice.