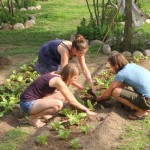 Before traveling to India we weren’t quite sure what our volunteer roles would be at Basunti but we soon settled into a gentle routine. Before the guests arrived we took the opportunity to get to know the place and the lovely Basunti team. We dug up beds of ginger and potatoes ready for the groups arrival, checked guests rooms and familiarised ourselves with the layout the general routine of the retreat. 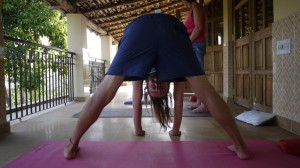 When the guests arrived we introduced ourselves and helped the team settle the group in. It was lovely to be there right from the start to meet and greet show everyone to their rooms, to generally help to make everyone feel comfortable and at home. Guests usually arrived fairly tired and warn from the toil of everyday life, this soon evaporated when they saw the lush gardens teaming with wildlife, dowsed themselves in the clean warm spring waters of their private showers, rested in a crisp clean bed and feasted on fresh and healthy food plucked and dug from the garden and prepared in the bustling kitchen by a happy and smiling team, which we were now part of!

Each morning we would wake to the sounds of the birds and bleary eyed we would follow the smell of coffee and frying eggs down to the kitchen. Raju and Sumna would be chatting happily over the prep of fluffy white omelettes speckled with chilli, tomato and a sprinkling of cheese. Dave would be hard at work in the back kitchen finishing off the bread for the following days breakfast and starting the prep for the evening meals dessert, either the enormously popular apple crumble or a spongy fruit cake, whilst Joan popped in and out of the kitchen taking omelette orders. 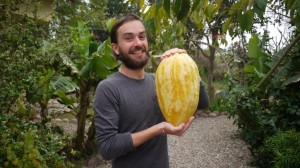 Everyday we would do the rounds of Namastes before heading out to see the guests ensuring there was enough coffee and tea, stopping to chat about their early morning yoga session, and clearing away the morning feast! Whilst helping to wash and dry each piled up plate, bowl and spoon by hand before being coaxed into a plate full of spicy omelette and homemade bread.

After washing down breakfast with a strong cup of coffee we settled down in the back kitchen to cut and peel the veg for lunch, making sure all peelings were kept for the ladies to take home for their cows at the end of the working day, nothing goes to waste at Basunti! Carving, slicing and dicing enormous squashes into cubes, squeezing garlic cloves from their silvery sticky sleeves and carving ginger from its woody shell to be piled into the pressure cooker to be simmered down and then whizzing with a blender into gloriously glossy soup. Once a week we would also thinly slice a bowl full of sweet and spicy red onions which would be covered in silky batter by Sumna or Kanta and we would head up to the outdoor kitchen/open fire barbecue pit with Raju to sprinkle handfuls of the batter into an oil filled Karahi (Indian wok with a flat bottom). Pali, the gardener, would sometimes join us for a cigarette break, sitting on his haunches puffing on his Bidi whilst chatting to Raju in Hindi about his mornings fishing on the lake and gesticulating to explain his point to us, and somehow we always understood!  When the batter was crisp and golden we would run down to the main kitchen with huge bowls piled high, for them to be whisked out to the guests accompanied by Dave’s crispy salads and an aromatic dip of fennel and mint. 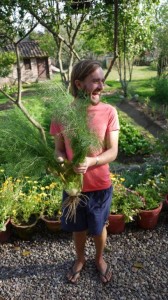 Lunch preparation would always take place after breakfast was cleared, the ladies had had their brunch of sweet raisin bread loaded with butter and fried, or little bowls of left over porridge with masala Chai sitting crossed legged on the wicker matting on the kitchen floor, and mid-morning lemongrass tea and biscuits had been served to the guests. Then at 12:30 Alex and I would head to the kitchen to help Kanta and Manjit with the Chapattis. We created a little production line, Kanta, Alex and I on shaping and rolling and Manjit on griddle duties, whilst Sumna blended the hot soup, Ragu chopped fresh herbs from the garden to sprinkle on top and Dave prepped the mooli salad. The ladies were very patient teachers and were always quick with a smile when our attempts in the perfect chapatti went well, and a giggle but also always a nod of encouragement when they went slightly awry and tips and demonstrations to better our technique; after many years of practice they are the masters of the roti! After some weeks Alex and I definitely improved the art and Alex was nicknamed Chapatti man to the great hilarity of the ladies!

The bell would be rung at 1 o’clock sharp for lunch and the guests would head to the main terrace from their mid- morning session in the yoga shala for their second feast of the day. Alex and I would dig in after the guests had had their fill and help with the clearing of plates and washing and drying up. Then it would be onto the veg prep for the evening meal, Alex and I would head up to the garden and pull the carrots straight from the beds, washing their bright orange skins in the fresh well water from the outside tap and then huddling around the back kitchen table we would chat whilst julienning the root veg, cutting florets of cauliflower and podding peas for mattar paneer and spiced mixed veg ready to be served with steaming nutty brown rice and homemade fruit chutney. 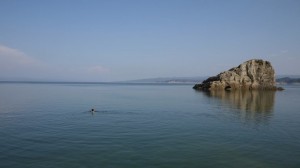 At 2 o’clock we often took a small group of guests for a walk through the village and down to the lake where we would take a dip in the cool water, often swimming out to the rock and clambering up it to get an even better view of the surrounding landscape. As the weeks went by it was a lovely way to get to know people from each yoga group and to also see and experience the landscape changing as the seasons changed.

In the late afternoons we would take the guests freshly laundered clothes back to their rooms, ensure all the housekeeping had been carried out and our bill spreadsheets were up to date and also do a spot of gardening. Preparing beds for new crops of ginger and chilli, planting experimental crops of squashes grown from seeds we had collected from the lunchtime feasts, and dried chickpeas which amazingly sprouted within a few days of planting in the baking sun and liberally dowsed with water every day.

Five o’clock would arrive and we wouldn’t know where the time had gone! From the terrace we would bid our final smiley Namastas to the team as they heading home, bags of veg peelings for the cows and bottles for recycling piled high on their heads, to amble down to the shore to Pali’s Kisty to take the short row home. We would settle down to a glass of beer and look out over the garden surveying the new beds and birds hopping around the turned soil for wriggly snacks whilst the sun set and a warm glow settled over the trees and temple tucked under the cascading bushes.

Raju’s prayer bell would toll the end of our gentle reflection of the day and we would head down to the kitchen to join Dave, Raju and Sumna preparing the final banquet of the day. The team would slowly slip off to eat dinner or turn in for the night. Alex and I chatted with the group until night and weariness crept in and people snuck off to bed. We stayed for a while in the back kitchen playing cards and talking, in case we were called upon in the night by a guest who wasn’t so enamoured by the night time abundance of nature to remove a creepy crawly from a room, and then it was Alex to the rescue with a glass and a piece of card to gently trap and carry the creature to a safe haven. We then washed, dried and tidied the remaining dishes away for the new day and the gentle cycle of Basunti would repeat itself.