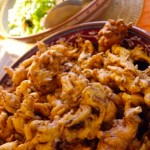 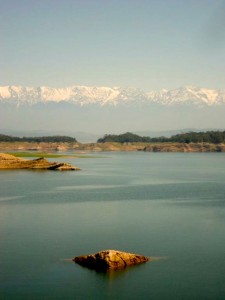 The gates to Basunti swung open to reveal an oasis, we were welcomed into its core through the lush gardens teeming with bustling bees, soaring bird song and trees weighed down with golden pomelos and tiny limes swinging from branches like strikingly green baubles. The last of the season’s chillies clinging to twigs gleaming and fiery red in the afternoon sun.

We have settled into a routine that is centred around the comings and goings of the guests. We have filled the visitors, and our own, bellies full of spicy lip smackingly tasty food, the ingredients we have dug, plucked and pulled from the incredibly fruitful and abundant garden.

New skills have been learnt including the art of chapatti making. Large bowls of powdery brown flour kneaded together with a well of water at its centre until it squelches and sucks between pounding fists and bowled into a sausage. Scooping with floured finger tips the now silky soft dough, rolling, scrunching, flattening the lightly dusted rounds and clapping into shape before they are placed onto an iron plate above the gas until small dimples of brown develop and then artfully plucked from the pan and placed above the flames until they puff and then slowly settle into rounds in the snugly lined basket ready to be whisked out to the guests. 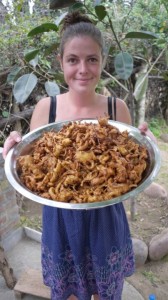 Samosas are a particular favourite, their crispy bubbling shells and comforting potato, piquant onion, spiky garlic, warming ginger and crisp pea centres are guzzled after being dunked into tangy tomato sauce. Onion pakoras are also a dippers delights, the eye wateringly spiky but deliciously cut red onions with a tangy sweetness makes the ideal centre to a crispy coating of chickpea flour dripped into a boiling hot cauldron of sunflower oil, which is placed above an open fire and scooped up when they turn golden and crunchy. Wolfed down with a bowl of sweet pungent Mangalbar soup with bobbing bites of soft potatoes in a tomato broth, and a side of Dave’s lush green salad scattered with aromatic fennel and a fresh mint sauce. This makes the perfect lunch.

To help replenish the store we tried our hand at gardening… shovelling and staggering with buckets full, brow sweating to throw onto precisely lined rows. We turned the soil, creating soft beds for the sumptuous squashes to lie in. The almond shaped seeds grow at an immense rate their shoots pushing through the earth gasping for the sun right before our eyes. Later on in the season these shoots will sprawl across the beds and sprout huge mango shapes which will be cut, carved and pulped into turmeric yellow, rich and unctuously glossy soup. The seeds will be kept and dried in the hot sun for later planting or tossed in butter and salt and fried to mix into lush green salads, peppered with crunchy mooli, rich tomatoes, tossed in fruity balsamic and rich olive oil.

The gardening is enormously rewarding especially when surveying our neat lines of turned earth from rocking chairs on the veranda, filling our nostrils with the spicy aromas of dinner being cooked in the main house wafting through the mango trees.