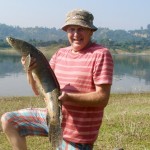 Tom lands a specimen 4.8kg Spotted Murrel and the first of the Bar-headed Geese arrive at Basunti.

By dave On November 5, 2012 · In Basunti Birds, Basunti Diary, Fishing 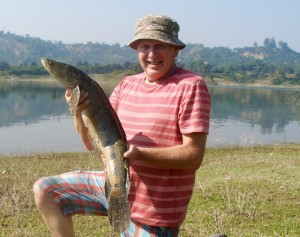 Andy Fish and Andy arrived after a very successful fishing trip in the Barot and Tirthan valleys, Himachal Pradesh. A tally of over eighty wild Brown and Rainbow Trout, caught in five days, made for two very happy fishermen. As the water levels have started to drop in the lake, they decided to try the gullies for Spotted Murrel. Tom, who has been helping out at Basunti for the last couple of months, decided to go with them. A more classic case of beginners luck you could not hope for. While Andy Fish was tutoring Tom on the subtleties of Murrel fishing he hooked into a real beauty. Twenty minutes later Tom landed a 4.8 kilogram Spotted Murrel, the biggest fish he had ever caught. The fish was filleted and then marinated in soya sauce, lemon juice and olive oil, before being cooked in a pre-heated oven for fifteen minutes at 250C. This was then served with mashed potato and an onion, tomato and parsley salad. A fitting end to another beautiful day. 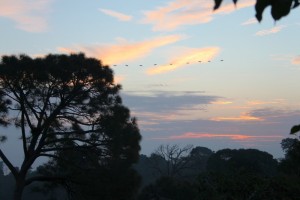 Basunti is blessed at the moment with classic Indian summer weather, clear sunny days with cool evenings. It is still perfect swimming weather, but with early snow on the high peaks it looks like winter this year will arrive around the first or second week of December.
The first of the Bar-headed Geese along with the arrival of the Blue Whistling Thrush, flocks of Scarlet Minivets and various other summer hill birds, indicate that things are starting to change.