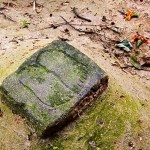 Mysterious Mounds in the Jungle.

I decided to explore a remote location on the other side of the lake, as the day was overcast and cool, perfect for slashing your way through the undergrowth and climbing steep ravines. The cooler weather also means that the snakes and numerous creepy crawlies are less likely to be around, having gone deep underground to keep warm. 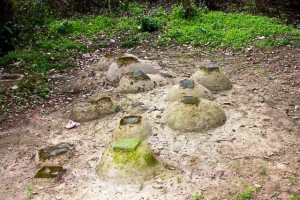 After about two hours of walking, mainly climbing, I came across a most unusual sight, something that I had never seen before. Enclosed in a clearing were about a dozen small adobe mounds, each capped with a stone, etched with two footprints, very bizarre. The clearing was obviously visited as the area had been kept clear and also dried Marigolds were scattered around. As to the purpose of the mounds, I had no idea. Being on your own in the middle of nowhere, the mind starts to envisage some strange scenarios – burial mounds for a lost tribe of tiny people… 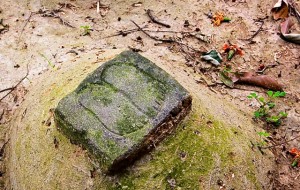 About half an hour later I came across a village and showed some of the inhabitants the pictures. From what I can gather the mounds represent the village, where the houses are placed and the number of people in each household. These were placed some distance away from the village in case a natural disaster happened, landslides are a real hazard in this area. As the villagers were all illiterate, the survivors could justify their land and family according to the position of the mound within the clearing and what was inside. I was also told that the inside of the mounds contained more stones, denoting the number of people in each family and their sex and status.

What a wonderful day out, so much still to explore and discover.