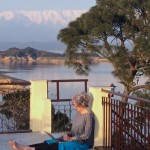 Hummingbird at Dawn – by Fides Kruger 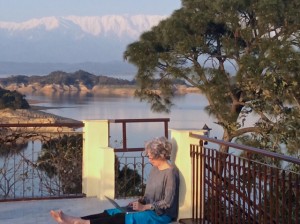 Today I noticed something fresh; the sound of the human voice floating freely in the air. There is little traffic, no hum of tall buildings. I hear children’s voices and women’s voices and the men, too. Calling out to each other, singing fragments of song. Not competing with anything but the birds and the wind and the occasional dog or cow. I am out for a walk, taking a break from writing and the pleasing confines of Basunti, the retreat centre in north India where my friend Tessa and I are staying.

The birds in this nature preserve are glorious. I had read on the retreat’s website that they would be but they are beyond all imagining. It is March, springtime in this part of the world, and there are waves of returning birds. The lush garden gains more colour with each day; its natural orchestra swelling with new sections and new interactions between individual birds. Call and response, subtle triggers and not so subtle showing off between male and female. I wonder if the various species are taking note of one another, or if they stick to their own? I can’t keep up with the density of sound. Each song a motif; a symphonic richness Mahler would have appreciated.

I have had bird calls in my head most of this winter while working on a project for the Art Gallery of Ontario in Toronto, Canada. After months of trying to understand and then imitate bird calls, I can’t stop myself from trying to make sense out of what I am hearing here at Basunti and even reproduce some of the feathered cries under my breath as I do solitary yoga on one of the marble rooftops. The inside of my head is busy in a way it has never been before. The birds have colonized me.

Just this morning a massive flock of large blue-black birds flew overhead. Just as I noticed the flapping of their wings I heard gasps and ‘Oh, looks!’ from Bella and her father Dave. Along with Izzy (Bella’s mum) and Jono (her fiancee), they run this centre, combining intelligence, beauty, brawn and good humour so that yoga practitioners and artists can get away and, in my case, become comfortably unsettled. Bella, her dad, and Jono when pressed, are bird fanatics and they have never seen a flock so large fly so low. I felt I could reach up and touch the white tummies of these birds from my second floor balcony…exhilarating and a little scary.

A few days later, I find myself writing against a backdrop of full on human song. It is coming from the village next door. I ask Izzy what occasion is being celebrated. It is the festival of colours, short by Indian standards, only lasting the weekend; we are now into the last morning of ritual. The women’s voices are insistent – they have been singing and drumming for hours. I have just finished my morning’s work and need a quick walk before lunch to clear my mind. It is hardly five minutes to the village and as I pass the blue bungalow where all the women are assembled, I wave. They immediately motion me into the courtyard, pulling out a brown plastic lawn chair. They are all seated on the ground around the drummer who looks no more than ten. Her ebullient pace tethers schoolgirl to grandmother through shared rhythm. They sing hard and loud for another ten minutes, the same eight lines, an A section followed by a B section, and then the A again. The song circles incessantly gathering rather than dissipating energy. Their voices are fervent, nasal, strident and absolutely insistent. They are having so much fun. It is fantastically energizing. Potently real.

They stop for a moment and one of the young women asks me if I would dance. I blush. I don’t dance. But I feel I should offer something. I tell them I sing and would they like that? Could I sing them a song? The young woman translates and as they all gently wobble their heads at me I start in on an Armenian folksong that I love – first asking her to explain that it is about the moon and that I am singing in honour of last night’s full one.

No sooner have I begun than three doors fling open around the courtyard and three men dash out to see just what is going on. This makes the women laugh and I want to as well but instead make my way to the end of the chorus with my heart pounding and my voice overfilling my ears. I feel nervous in a way I don’t when on stage. We all grin at each other. I excuse myself and high tail it back to Basunti for lunch.

Their song is for community and in community. My song is from a culture which is not mine and a European performance tradition that sees me singing alone and usually with a little barrier between myself and the listener – maybe an orchestra or maybe lights or maybe even virtually, on a CD. A tradition in which I am supposed to pour my heart out professionally.

Theirs just seemed so fun! And I don’t think I had as much fun!

I can’t tell if my singing for them was a generous response or a desperate one. I know I wanted to thank them for their singing and their lovely invitation to participate. But I felt a little dose of fight or flight in my body while performing and it has left me with so many questions as well as a funny feeling about being ‘a singer.’ I feel sad now to think that for me it was performance and for them it might have been just a genuine part of life.

I like to think that everyone can sing. The sounds and impulses we need to express ourselves in this way come from our autonomic nervous system. For singers and actors a lot of time needs to be spent combing the fibres of the inner body to make a weave I think of as healthy, one that can be repeated night after night during the run of a show or opera. This is what I am writing about as I retreat from the everyday bustle of voice teaching and performance back in Canada. I am tying words to the page in order to describe just how to reconstitute emotions to make sure that all our juices are flowing freely. Voice integrating flesh. Truth and the fine tuning of self leading to deep inner harmony. Both expert and amateur all at once. Human resonance. Shared vibrations.

One afternoon Bella and I head up to the same marble rooftop where I have been practicing yoga. It is the end of the afternoon and our mission is to sing like birds before the supper bell rings. I have told her about my bird project back in Canada and she thinks it would be fun to learn how,  maybe even using this tool when she does art with the local children. From our perch we can see the Himalayas suspended above the far away mouth of this massive man made reservoir. I now know that this valley is where Alexander the Great turned back from his conquests and there are treasures below the water as well as above. A pink haze accompanies the setting sun as Bella and I start to make sounds that are anything but polite, our big bodies translating the birds’ caws and shrieks into patterns we can repeat. We practice for about an hour, laughing a lot as we get wilder and wilder, throats squeezing like genteel heavy metal singers, noses channelling some Janis Joplin like screams. Later that evening Izzy tells me that she asked Dave about the new birds in the garden…had he ever heard this particular noise before?

The next day at breakfast I have the pleasure of tasting a juice brand new to me…freshly squeezed. Dave explains that it is from a type of lime native to this part of northern India …its size and colouring that of an orange, with just a hint of green in the skin. The juice is a pale yellow, more like a lemon’s, however, the taste is neither tart nor sweet. It is balanced. Apparently this fruit is never eaten, only squeezed and drunk during the winter months. How lucky for me. Morning nectar, as I continue to explore my own true nature. Humming bird.