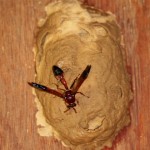 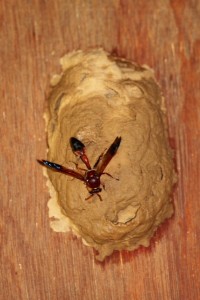 This hornet (wasp?) has taken to building its mud house, on the main veranda next to the dartboard. The whole structure consists of about twelve separate cells, which the Hornet then packed with caterpillars, that she had stung and paralysed. She then laid one egg in each cell before closing it up and moving on to the next one. Truly gruesome, when the egg hatches it has a ready supply of food, which is doomed to be eaten alive, nature can be truly macabre.   The hornet is not at all perturbed if I go near its adobe larder, but being just over three centimetres long it knows it is a force to be reckoned with.