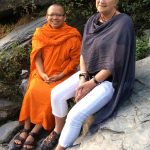 We’ve been at Basunti for a few days now.( I’m not actually sure of the day of the week any more!)

It is great to be here. It is really hot and the pool and lake are welcome counterposes to our week of travels.

Nothing seems to change. David, Izzy and staff continue to make everything perfect. The gardens are lush, the food is lovely, the group is full of fun.

There are talented artists in the group. We haven’t seen the mountains clearly yet, just a grey smudge in the background which disappears into the heat haze and then teases us with a hint of possible revealing. 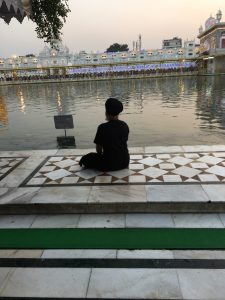 Our week of travelling was brilliant, full of unexpected adventures and events, both magical and not magical! India.

Amritsar was drenchingly humid. The temple was awesome and we were the only Westerners there, so will be appearing in rather a lot of Sikh family albums!

People were curious, friendly, wearing the most exciting colours. Our theme was ‘contrast’ and we were surrounded by hundreds of stunning complementary colour combinations. So inspiring.

I spent a whole morning trying to get a sim card for my India phone. Had to have passport photos on glossy paper and every page of my passport and visa photocopied and signed! The patriarchal atmosphere meant that I had to give my late father and ex-husband details as well as the rickshaw driver’s signature. I joked that we were now married. He then invited me to the cinema with him!! Silly girl. All in a day’s work in India. 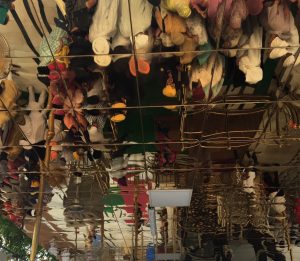 We drove to Mc Leod Ganj and stayed for 3 nights in the small Tibetan guest house. All of the yogic women in the group turned into frenzied shoppers. The men watched on. Bags bulged. I feared for the baggage in the cars and the flight home. I was fairly restrained. Only one scarf for me, so far!

Temple, walks to waterfall, fresh lime sodas in jam jars and a bustling atmosphere, markets, monks. I walked partway to the waterfall and sat to soak up the view. A delightful young monk from Thailand in luminous orange robes, and a smile to match, joined me and we shared views of the world.

We then drove on to Taragah Palace Hotel through the lovely Kangra valley calling at a local pottery. The landslide-ravaged road ran alongside the huge and towering Himalayan range. Surprisingly the snow was not dazzling white as before. There has been no fresh snow since last November.

We visited our first Hindu temple en route. After the shiny golden colourful opulence of the Sikh temple in Amritsar, and the rather simple Buddhist temple of the Dalai Lama, this moody 7th C dark stone temple really touched me. Carvings, bells, a mysterious atmosphere with stories to tell in every stone. A different sort of beauty. A different sort of devotion. I always feel a bit voyeuristic.

Taragah was an old palace, colonial in parts, crumbling in others with a new wing that was trying to be Western posh. Thankfully we stayed in the old wing with photos of maharajas, of polo matches, with chandeliers and panelling and marble floors. The gardens were lush and overgrown, full of mongooses ( mongeese), cheeky monkeys that got too close and plenty of mosies. The Bombay gin was welcome. The silence after all the travel was bliss.

The next morning we went to the nunnery recently built by Tenzin Palmo. A western woman who had spent 12 years in a cave high in the Himalaya ( 3 years were solitary). I often find Buddhist temples bright and a bit garish, though the sound of monks chanting or drums and the long horns resonating seem to hit the spot. But the nunnery was soft with a gentle atmosphere and framed by the Himalaya high above and beyond. We were all touched by the welcome, the environment, the feelings in the temple, the art work with androgynous figures, rather than male Buddhas, that seemed soft and very feminine. Tenzin Palmo was in Dharamsala. So we missed meeting her. Shame! A powerful woman searching for enlightenment in a man’s world. 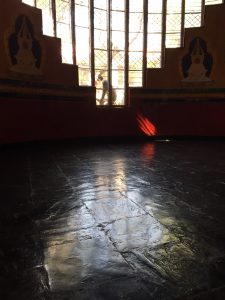 More glorious travels through the lush valley full of forests and jungles. Hardly any people or cars. Empty spaces. We finally arrived at Judge’s Court. A wonderful small Colonial manor house in a small place that is a craft heritage town. Not for tourists. Local potters, scarf makers, weavers, spice shops, hand made shoes. Amazing old architecture crumbling and falling down. Narrow cobbled streets. Curious children. Temple tanks. Open drains. Swallows swooping around old archways. Nothing tarted up. Simply authentic and for the locals. Honest, busy, colourful and aromatic rural India, just as it is.

But, ‘expect the unexpected’, I said to everyone.

And here was another example. Judge’s Court is a favourite place of mine. Secluded, full of stories and history and paintings with rooms going back into other times. Timeless. Quiet.

But. We arrived at the same time as another large English group. The first we’d seen for a week. And they were in the colonial  rooms in the old house.

The charming owner of the house showed us around his new extension with pride!. The decor was again western style posh, modern. By contrast, he then showed me the 300 year old annex, family home where we could also have a few rooms. Love at first sight. A film set. Old twisty stairs, carvings, niches, quaint windows, antique Indian furniture. I wanted to live there. But I was allocated the honeymoon suite in the’ new build’ with terrace and view of sunrise and the Himalayas. A different sort of bliss. 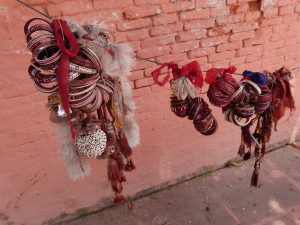 We then left for Basunti, at last, calling at Dada Siba, a small temple that is full of Kangra Valley miniature paintings and with silver doors. The whole place is hidden amongst old tumble down buildings and a market.The last time I went the surrounding walls were grey and crumbly. They are now peach pink!

The monsoon-rutted track into Basunti was scarily narrow and near the Lake edge. The gates to Basunti opened into the lush gardens, the smell of lunch, the warm welcome from Dave, Izzy and the staff.

Fantastic to actually unpack cases at last, to eat salads and to start our yoga and expand on our very apt theme of Contrasts. This place could not be more of a contrast to our action-packed, crowded, busy week of adventures. Our senses have been alive.

A place to breathe and really relax despite the strange  2 day virus that gave chesty coughs and aching bodies. So every day a new person was missing from the yoga and another person returned. Very discombobulating for a yoga teacher! 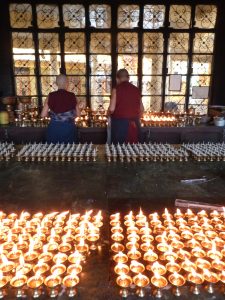 But resting, swimming, walking in the jungle, practicing yoga on the roof as the sun rose and the crescent moon faded, chanting and studying the themes in the thatched shala in the evening as the sun set and the ginormous fish plopped loudly in the moat and the birds tried to sabotage our harmony.

It is wonderful to be here and time is both slow and leisurely but it will too soon be time to go.

The yoga and the study alternates with loads of boisterous fun.

There are artists in the group who are doing beautiful sketches. There are writers producing powerful haikus. There are fine photographers and a jeweller and others who are inspired to try.

It is a great group. Sadly two have had to leave early due to a family bereavement.

It is wind down time. We love it here.

Hope this gives a bit of a flavour of our trip. There are many, many more stories to tell!!