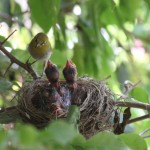 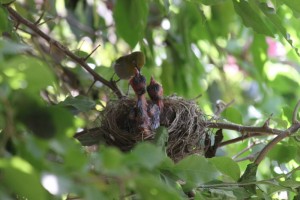 One of the after effects of the storm is that any birds that had built their nest in an exposed location, found it completely trashed the following morning. The Oriental White-eyes build tiny, delicate, little nests.  This one must have taken a direct hit from a very large hailstone as all three eggs were smashed and the remains of the nest were on the rocks under the bougainvillea.
The distraught parents spent about half an hour searching the bush and then decided to adopt the Himalayan Bulbul chicks that had just hatched in the same bougainvillea. This has caused some consternation amongst the Bulbul parents as they were really not sure what was going on. A nightly tussle ensues between the two females about who is going to sit on the nest at night, which at the moment is being won by the legitimate parent. 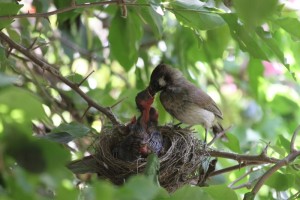 The chicks are loving it and are growing enormously fat on an endless supply of grubs and insects. They spend their time lying on their backs, mouths open, stomachs extended,  waiting for the next tasty morsel to be presented to them by both sets of parents. Not sure how this is all going to end up, as the chicks are already the same size as the White-eyes! What is going through the White-eyes’ minds about the sudden arrival of giant babies, I am not sure, but it is truly fascinating to watch. 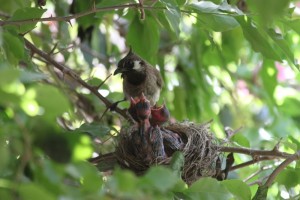 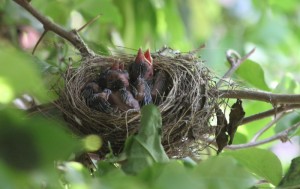